Is subprime lending making a comeback?

News reports have suggested that higher-risk lending is on the rise, but an analysis by the Minneapolis Fed paints a more nuanced picture.

Has lending to riskier borrowers made a comeback? Earlier this year, a number of news reports suggested that there is indeed a resurgence of subprime lending—that is, loans made or credit offered to borrowers with lower credit scores—following a pull-back during the Great Recession. According to these accounts, lenders had been relaxing their lending standards, particularly in mortgage lending, in response to sustained low interest rates and improvements in the economy and the housing market. Lenders weren’t only returning to riskier home mortgage lending, the accounts indicated, but to other lines of consumer credit, too, including bank credit cards and auto loans.

An analysis of the comeback question, based on data that track the actual borrowing behavior of consumers through their credit files, tells a different story, though. Overall, the data reveal no evidence of a subprime lending resurgence for mortgages and bank credit cards. But the data do reveal a recent increase in the percent of subprime borrowers holding auto debt. However, the increase in auto lending is broad-based and not just occurring among subprime borrowers, who make up a small share of the overall auto loan market.

The word “subprime” generally refers to the heightened risk that a loan may enter into default, based in large part on a borrower’s credit characteristics, such as credit history and credit score. Because of the heightened credit risk, subprime loans generally have higher interest rates than conventional, or “prime,” loans. The analysis discussed here, which was performed by the Federal Reserve Bank of Minneapolis, identifies riskier, or subprime, borrowers using consumer credit scores as estimates of creditworthiness; it categorizes a consumer as subprime if his or her credit score is below 660. The credit scores and other data used are drawn from a dataset called the Federal Reserve Bank of New York/Equifax Consumer Credit Panel, which is a nationally representative sample of consumer credit information consisting of 5 percent of U.S. residents with a credit report that includes a Social Security Number.

The analysis focused on the percentage of prime and subprime borrowers with mortgage, bank credit card, and auto loan debt in the U.S. as a whole and in the largest population center in the Federal Reserve’s Ninth District—the Minneapolis-St. Paul metropolitan area—from 2000 to mid-2014. It is important to note that the share of consumers with subprime credit scores remained mostly unchanged over that period, dropping only a little since 2013. This consistency in the share of subprime borrowers over the years allows for straightforward comparisons of debt usage at different points in time. As of the second quarter of 2014, almost one-quarter of consumers in the Minneapolis-St. Paul area and just over one-third of all consumers in the nation had a credit score below 660.

Mortgages and credit cards down, autos up 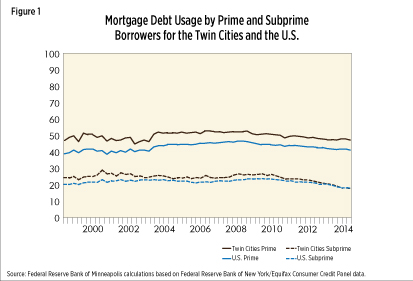 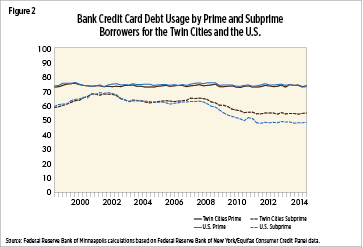 While mortgage and bank card usage do not show a subprime revival, auto lending tells a different story. Overall, the share of consumer credit files with auto debt rose considerably prior to the Great Recession. (See Figure 3.) During the recession, the percentage of consumer credit files with auto debt declined, but it has trended upward since late 2011. The share of subprime borrowers holding auto debt saw a big drop after 2008, but the rebound that followed was strong and brought the prevalence of auto debt usage among subprime borrowers close to its pre-recession peaks. 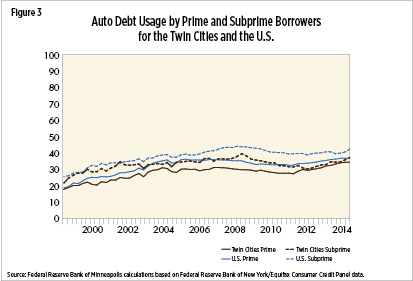 In summary, the much-discussed comeback of subprime lending appears to be limited to the auto loan market. Within this market the increase is less pronounced given the higher relative increase in prime auto lending during the same period.*/

The increased availability of credit to subprime borrowers seeking an auto loan may be, in part, the result of new auto-tracking technologies. For example, lenders are installing GPS (Global Positioning System) devices in vehicles purchased by borrowers with riskier credit scores. A GPS device can transmit information about the vehicle’s precise location, making it easier for the lender to repossess the vehicle if necessary. Related devices can also be used to disable a car until it can be repossessed or until the delinquent borrower becomes current on his or her loan. These tools mitigate the risks associated with subprime lending by reducing default rates and increasing recovery rates when defaults do occur. As a result, they may be making lenders more willing to lend to subprime auto borrowers. 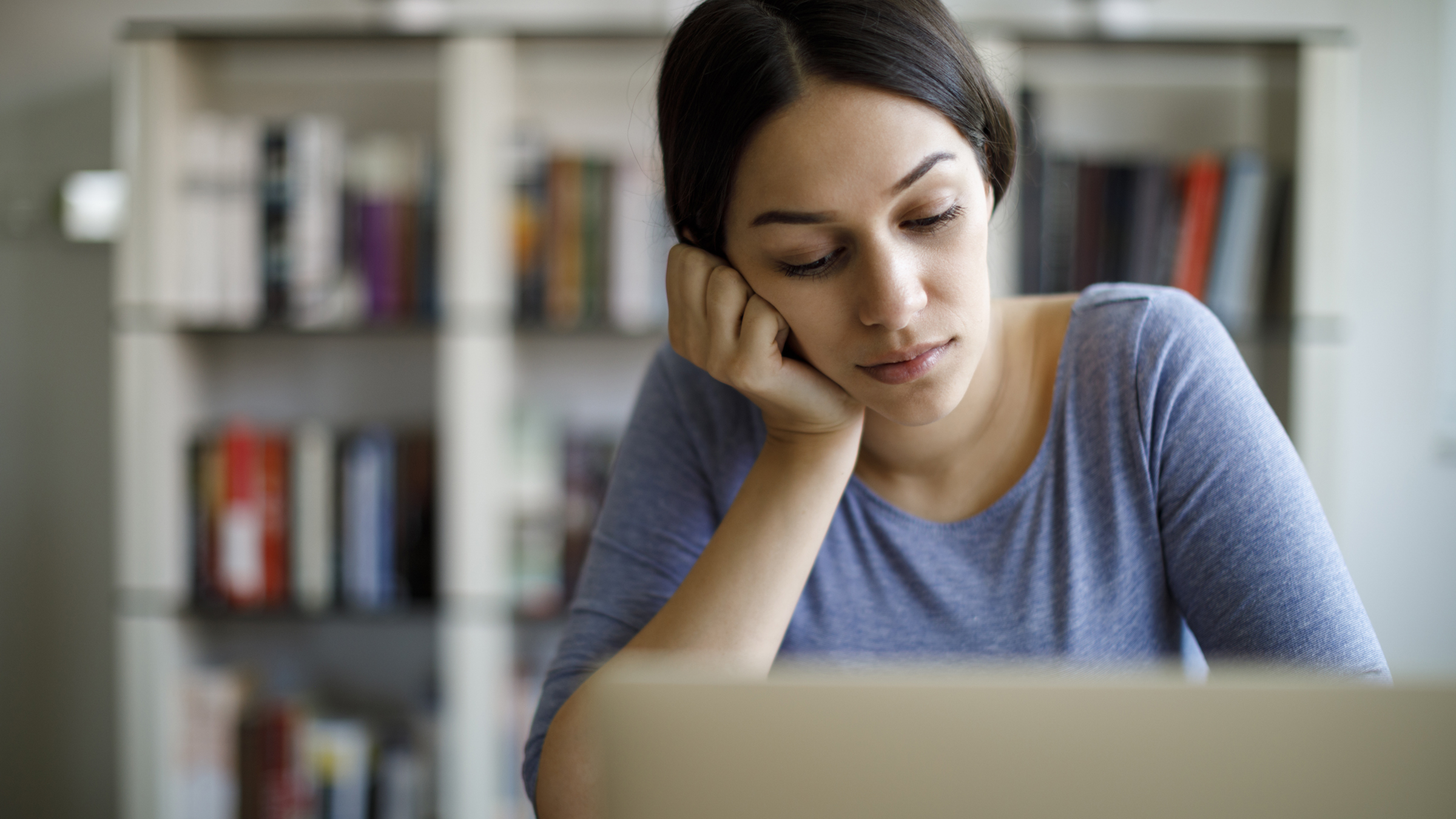 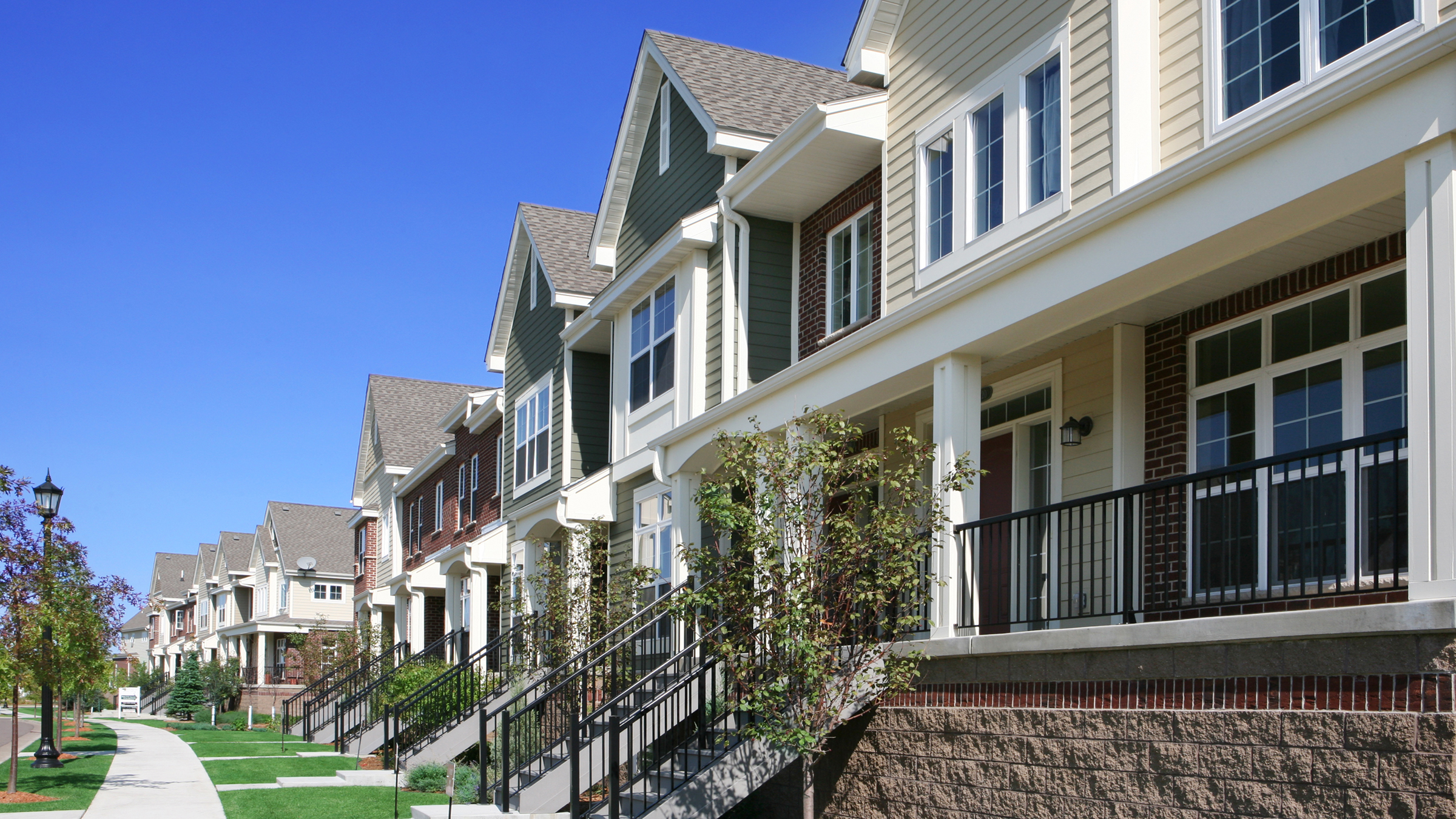 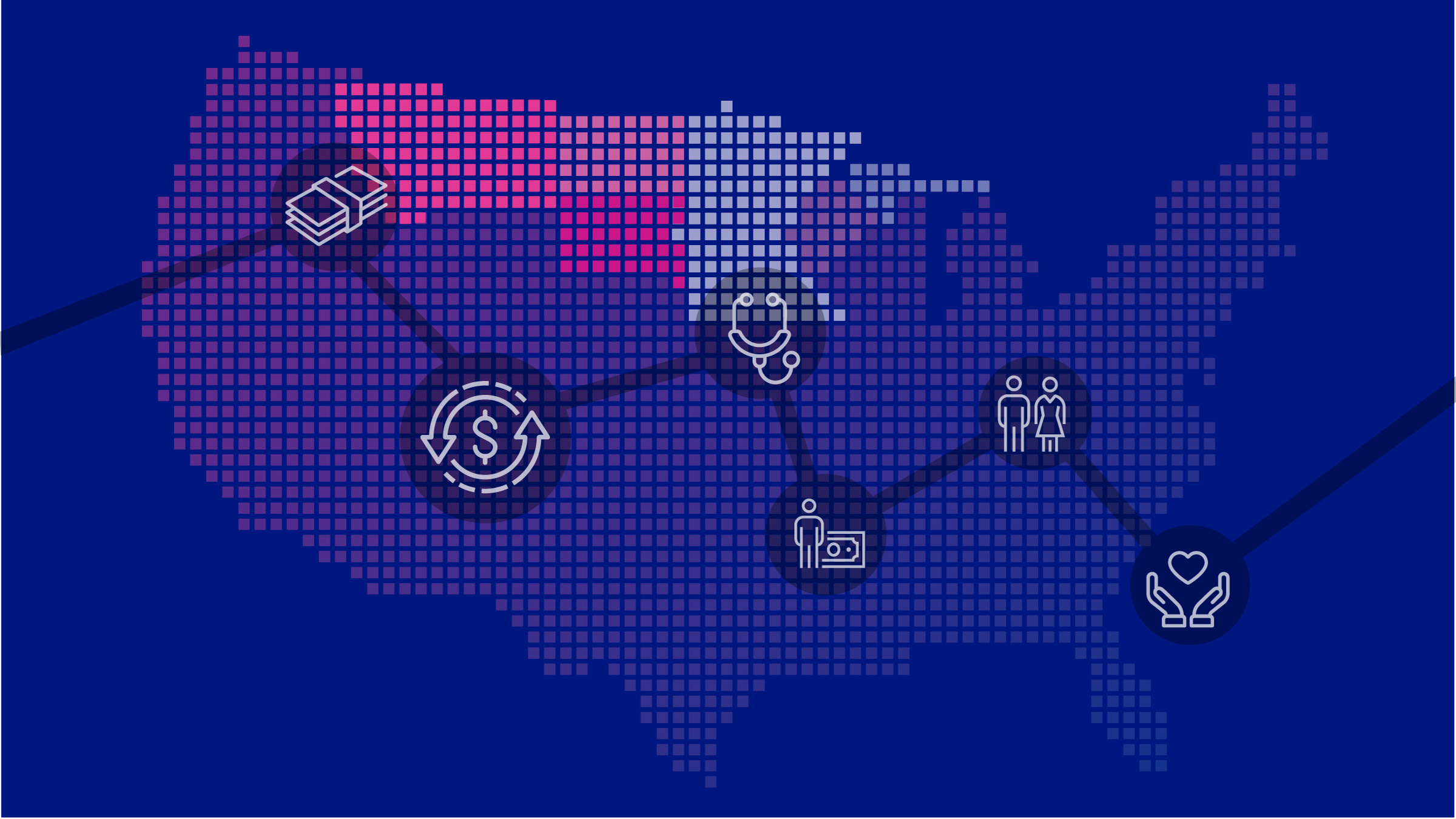